Born in Wageningen (The Netherlands) in 1994, Danny Eduard Rombout grew up with Indian, African, Caribbean, Latin American and Afro-Cuban music. He was surrounded by a musical and lovely family that always affected him with the love for music.

Danny started to have drum and percussion lessons in the local music school at the age of nine. His former teacher there, Raoul Soentken, goodly stimulated his musical development. After considerable progress, he got Danny invited to his band Grupo Azul from Arnhem, in which Danny played the bongó and campana.

Not so much longer, Salsa Big Band Salsabor (Nijmegen) invited Danny to join. There he played for four years. Playing congas surrounded by many experienced musicians, his hand percussion playing started to grow fast and become well-molded. 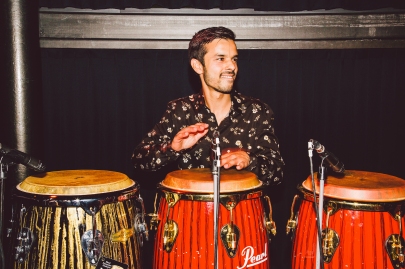 In 2014, one year after successfully finishing his preparatory year at the Conservatory of Amsterdam, he moved to Rotterdam, where he followed the bachelor Latin Drums and Percussion at the Codarts Conservatory. He deservedly graduated with distinction in 2018. Having lessons with a.o. percussionists like Changuito, Luisito Quintero, Roberto Quintero, Marvin Diz,  Paquito Gonzalez, Samuel Torres, Orlando Poleo, Eliel Lazo, Alex Miguel, Lucas van Merwijk, Udo Demandt, Nils Fischer,  provided him the most versatile environment to boost his musicality and percussion and drum playing.

Until now Danny has played in hybrid, evolving and continuously different set-ups in a respectable list of projects within different genres. He always included his Surinamese and Indian roots in his music, while he also finds major inspiration in styles like (Afro-)Cuban, Latin, jazz and flamenco.

Future-wise, Danny’s main focus is to develop his musical activities and projects. He works on a variety of skills and practices, either in different instruments, or in composing, producing and arranging. Right now he does that with newly founded quartet BEATRIZ. This group consists of Laura Argudin (keys), Steven Brezet (percussion) and Richie Pattynama (bass). The group aims to contribute to the broad world of (Afro-)Latin American music, inserting new influences that can be considered gutsy. Some first recordings are in progress. So right now, they got a bite on it!